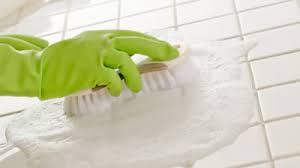 I’ve danced for as long as my memory can recall. In high school, creating a formation with some choreographed movement with a portion of the team being on their knees was always a go to move and a show stopper. Later in life, when I transitioned to leading praise and worship through dance, I found myself again creating movement that included being on our knees. Now that I’m a little older, I find myself on my knees less for dance, but instead for either prayer or cleaning the bathroom shower. Over the weekend, I did a combo move, of both cleaning the shower and praying as my song for this season played nearby. I placed it on repeat. Lean in. It’s entitled, “God is Mighty,” by JJ. Hairston featuring Tamela Hairston. MY GOD! I won’t get into the particulars, you’ll have to listen for yourself. I’ll insert here that I detest cleaning the shower. Nevertheless, it’s a necessary evil. While I scrubbed for what felt as though wasn’t making a difference or dent in the job, I listened to the songstress bellow, “And nothing is impossible, we serve a Mighty God!” I began to consider the paradigm of being both on my knees and attempting what felt like the impossible while praying to the God by which all things are possible. What a time I had in that shower.

When we find ourselves on our knees, the more we can consider, imagine, and accept that there is nothing impossible for God. Jeremiah 32:27 affims, “Behold, I am the Lord, the God of all flesh. Is anything too hard for me?” This is God speaking about self. That suggests that the most difficult dirt, the most abhorrent action, the messiest matter, can all be absolved by the absolute God! Glory! For whatever we find ourselves on our knees praying, we can tap into Lady Hairston’s declaration and respond, “He’s still mighty!” But we won’t get to that resolve without confronting that which requires the Lord’s intervention. The attention needed within my shower didn’t occur overnight. The stains of life happen gradually. Yet the best methodology I know for addressing them is through communication with the Master. Whether you are able to assume positioning on your knees or not, just be certain to assume the posture of prayer.

As the song ministered to me, on my knees, my mind flooded with memories of the extent to which God has shown His mighty hand over my life and those of so many connected to me – and even strangers. Just on this past week alone, I watched the news regarding the tornado damage in the south, and yet no lives were lost. I watched the tragedy of the white terrorism in Atlanta and that the intent to take more life than the person already had was thwarted. Even amidst the most horrific considerations imaginable and experienced, we still are able to trace the grace of God. On my knees, my tears watered the base of the shower as I considered the goodness of God and how mighty He has been in my life. I got lost in my worship. Suddenly, the overwhelming task that I detest wasn’t the focus. I recounted being kept by God, when I’ve been faithful and when I’ve been foolish; when I’ve been saved and sinful; when I’ve been determined and defeated; when I’ve been clear and chaotic. Whatever the state I’ve found myself in, there has been God – when I’ve been on my knees for creative purposes or on my knees for christocentric perpetuity – there God is, availing, beckoning and centering access to rest in Him while He cleans things up – beyond my expectations – just like my shower when I came to myself.

Stay on your knees. There is indeed nothing too hard for God. We serve a Mighty God!