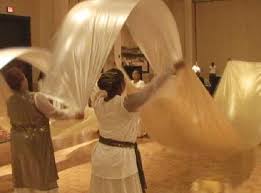 The pageantry of satan

Over the weekend, I was cleaning out a closet. Allow me to be a bit more specific. I was cleaning out my mom’s closet, which houses all my dance ministry garments. To be honest, it takes up the majority of her closet. My mother has always been a minimalist, and I perhaps operate as the polar opposite. Funny still is the fact that our daughter takes after her grandmother. Being situated between them causes me to assume quite a bit of shade. Nevertheless, I got so very saddened going through the garments. Just a few days ago, a Facebook memory popped up on my timeline from five years ago that featured a little girl, dressed in dance attire, all the way to her shoes, laying flat on her stomach, seemingly exhausted. My post that accompanied the image read, “Did a lot of ministering in dance this weekend.” That post made me long for those days – but looking at the garments, simply mad me sad. It’s not that I’m not dancing at home, but I miss ministering with other worshippers; I miss live instrumentation; I miss that exhaustion and I miss being used by God in that particular space and time. So, I gave way to the tears. I summoned the sadness. I allowed myself to sit in that grief.

I examined not only the garments, but the billows, by which I have quite a few. Billows are used as a wave offering to God. They allow for flowy, soft worship. They are colorful and beautiful and used in an often dramatic fashion. Many would consider them and flags to represent pageantry. When they are operationalized in worship, it is magnificent. Before I spiraled, the Holy Spirit intervened. Thank God for Jesus! I was reminded that satan has not ceased from troubling. The enemy is still doing his level best to distract, detour, dismiss, dismay and delay. In the moment I was experiencing, and I’m certain, you as well, his pageantry can almost make one believe that he wins; but guess what? He won’t. And he never will.

What does his pageantry engage? It can reflect that the show is going on without you. You’ve rehearsed all the movement, the choreography, you conditioned, you prepared and yet, it appear it was all for naught. Further, it feels like everyone, except you will get to live out loud while you sit in solitude. The performance of satan is real – but that’s just it – it’s performance and performative. It is perfunctory. The enemy has been doing the same dance movements since the beginning of his fall. It is superficial. The enemy has no other option available to him, which in turn explains why he pretends and attempts to convince that neither do you. The enemy’s handiwork can resemble a huge colored billow, but not as a wave offering to God, but instead a manipulative maneuver to make us believe that God has turned His back on us. In the words of Jim Acosta, “But that’s just not true.”

The enemy has garments that he changes to profile whatever we are experiencing – but rest assured we too have garments – and we can use them, in and out of the dance ministry – in and out of the sanctuary – in and out of the closet – in an out of our home or whatever space we have been afforded access. As I lamented over the garments, I was reminded that I have been granted the garment of praise. As we look to the Word of God, we may be encouraged: The Spirit of the Lord God is upon me, because the Lord has anointed me to bring good news to the poor; He has sent me to bind up the brokenhearted, to proclaim liberty to the captives, and the opening of the prison to those who are bound; to proclaim the year of the Lord’s favor, and the day of vengeance of our God; to comfort all who mourn; to grant to those who mourn in Zion—to give them a beautiful headdress instead of ashes, the oil of gladness instead of mourning, the garment of praise instead of a faint spirit; that they may be called oaks of righteousness, the planting of the Lord, that He may be glorified. – Isaiah 61:1-3 (NIV)

We may not be in our places of worship. We may not be on our same job. We may not be in our same house. We may not have the activity of our limbs in the same way we did nearly seven months ago. Yet there is good news! We are anointed. We do not have to succumb to participating in the pageantry of satan, because we have the promises of God! His promises don’t require production because they are prophetic! His demonstration doesn’t require drama because it is destined! His anointing doesn’t require acting because it is affixed! And when we are under attack, we can go under the covering of God, just like dancers encourage worshippers when ministering with billows. Going beneath the moving billows ushers safety, security, a release. Feeling the calming breeze from the billows going up and down and sideways, reminds us that life can be a bit chaotic, but as we remained under the hand of the Almighty, we are safe. Garments on, garments off – God is in control and will get the Glory out of my life – every. single.thread. In my best and most dramatic, billowing fashion I sing, “Ride on King Jesus! No man cannot hinder me (nor you)!”

To watch a billow experience, visit this link: https://www.youtube.com/watch?v=7qjknV37um0