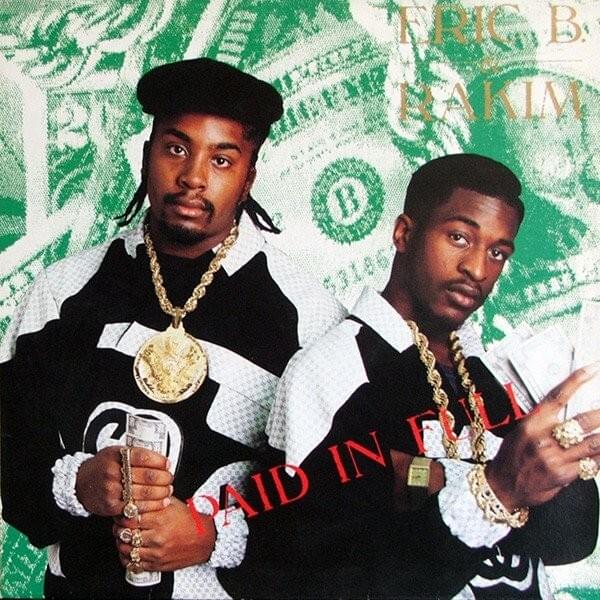 Growing up I recall my friend, Briana had what we called a, “boom box.” We would listen to cassette tapes on it, sitting on her back porch for hours. We also listened to the radio on it as well. We experienced a moment one day that imprinted within my psyche. It was the moment when Eric B and Rakim’s song, “Paid in Full” came on the radio. We lost it! The old school broadcaster opening until the beat dropped set in our spirits deeply. As soon as the neighborhood record store opened on the following Saturday and we finished our chores for our allowance, we gathered to make the ultimate purchase so that we no longer had to wait until the radio played the song. We could enjoy it all on our own. At the age of 18, when the album that bore the same title as the song emerged, I was about six weeks from going away to college. As a first generation college student, I wanted the knowledge that college offered, the fun that I believed I was to have and undoubtedly, the money to provide my very hard working mom with more. Four years later, the first anticipations were true, but the latter, well, not so much, at least as I how viewed it.

Following undergrad, I went on to graduate school. I exchanged my pursuit of communications and chose the field of education. My new found discipline seemingly altered assumption number three, but I absolutely loved it. In fact during my undergraduate years, as I embarked upon my first major class, I felt a pull in my spirit to change my major to education. I sought out an administrator in the education department and was dissuaded from switching. Side eye to said person all these years later, but I digress. I went to graduate school for my masters and then for my doctorate. Six years beyond my undergraduate years. I worked full time. My first job post masters paid me $25,000, and I was a single parent. Taking out student loans provided stability and sustainability. I also bought into the belief that some of the loans I assumed would be forgiven since I’d planned to go into the field of education and make my contributions in that space.

It’s been nineteen years since I finished my last class and I have been “thinking of a master plan” and paying student loans the entire time. I’ve been blessed to experience salary increases but I’ve not been afforded the ability to pay off my loans. I’ve been sent from servicer to servicer, I’ve consolidated and did everything I knew to address the debt, yet nothing worked. Like many others, I took a breather during the pandemic. I was questioned by those close to me as to why I didn’t continue to make payments, especially because the interest was at zero. As the media continued to amplify the call for student debt forgiveness, I prayed for such in my life. Slowly, I watched connections on social media share their good news of forgiveness, hoping that I too, would be a recipient. I submitted paperwork and was told that in order to be forgiven, my monthly payment would increase from $600 to $1400 per month. I was going to need a lot more “dead presidents.” Additionally, I found that the math the new servicer provided suggested that I had 59 more payments to go in order to reach my 120. As the nieces say, “the math wasn’t mathing.” Meanwhile, I still worked in education, witnessing students I mentored secure starting salaries that surpassed what I was making with 30 years of employment and a terminal degree. On October 2nd, my Pastor, Sharon Dean of Wake Chapel Church, instructed in a sermon for us to go home and write down everything that we desired God to move upon. Amongst many things, I wrote down the entirety of the student debt I owed, “$122,310.12.” Beneath the number I wrote, “Lord, you are faithful.” I placed it on the wall of my closet where countless other prayers and petitions are. I prayed. I also wrote it in a book that holds my requests of God. On October 21, 2022, the day that debt cancellation was paused due to a court case, I learned that my debt was forgiven! The letter in my portal read, “Retain this letter as your PAID IN FULL status.” I lost it; but so much more than when I first heard Eric B and Rakim, because as dope as they were (and are), my PAID IN FULL status stems back to an old rugged cross and the intentions of Christ for my life, the steps that I assumed that were productive and even the ones I took with less knowledge or foresight as to the impact of my actions. I assumed debt for “my now” not thinking about the impact of “my later.” As a first generation student and one from lower socioeconomic means, I was not armed with knowledge that would assist me in understanding the currency of my decisions, but for the grace of God that causes me to overcome.

I’ve always been generous with my time and my talent. I’ve written recommendations in the tenth hour. I’ve done references far and wide. The number of presentations and engagements I’ve done free of charge are countless. Each of these opportunities were afforded to me because of the spaces I held in academia, and yet no matter how hard I’ve worked, the consequences of my choices has hung over my head and caused me to continually seek more lucrative employment in an effort to address my debt. But just like at Calvary, a debt has been paid on my behalf that my perceived brilliance could not. Colossians 2:14 decrees, “He canceled the record of the charges against us and took it away by nailing it to the cross.” I thank God today for granting me access to funding, when I so desperately needed it, for school, for books, for gas and for paying an incredible undergraduate education major to pick up my daughter, feed her, assist her with homework, read her bedtime stories and tuck her into bed, while her mom was attending class until 11pm at night. But I thank God more for placing the boldness and intentions in the mind of those fighting for fairness and reform, and for paying the debt on my behalf for my student loans and for so much more. I’m still working to take care of my mom who sacrificed so much for me, more than I will ever know. In the interim, I’m grateful beyond measure, cause it took me too long to make this album. ❤️