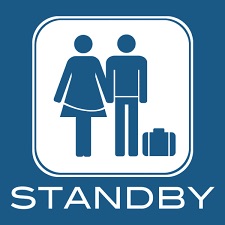 Years ago, one of my cousins worked for one of the major airlines. She had a plethora of “buddy passes,” whereby one could fly without paying any funding. Needless to say, she was a big hit in the family. However, most folx who could potentially benefit from her perk were unable to use it. The advantage leaned most toward people who could fly standby; essentially people who could ready themselves quickly and were flexible in their travel. They also couldn’t be picky in terms of seating, but could assume whatever assignment available to usher them to their destination. As I pondered the content of this blog, the Holy Spirit spoke and shared that in this season, only those who operate in a standby capacity will benefit from the journey and land precisely where is necessary and purposeful.

I personally have no idea where your energy, your commitment and your shall we say, “sticktoittiveness” is right now. I’m weary. Not only physically, but specifically, mentally and emotionally. I’ve been doing my level best to remain in place sheltering, limiting my outings and interactions with others and yet as I watch social media I see many who are traveling first class, going everywhere they desire, seemingly not concerned or compelled to wait. I found myself angry, disturbed and sad. Concerned about not knowing how long we will be unable to interact with each other, and for someone who is extraverted like myself, I find it to be hard. I feel as though I’ve gotten dressed, packed my things, in anticipation of going, and instead, I’m sitting at the gate, watching others board, hoping my name will be called over the loud speaker, so that I too can depart to somewhere amazing. Instead, here I sit. Curious. Drained. Questioning, what will become of those who follow the rules and do not seem to advance?

In exploring the definition of standby, Merriam Webster states, “one who is ready or available for immediate use,” but also, “one to be relied on especially in emergencies; and “a favorite or reliable choice or resource” and finally, “one that is held in reserve ready for use.” I appreciate the last expression the best. For if we are to be ready for use, we must maximize our time in waiting, remaining focused on God and not those around us.

When on standby, the conditions for moving forward are met. So then, we must ensure that we are remaining in a state of preparedness. What might that resemble? Practicing gratitude for the now, more than the next. Connecting to people that can affirm and maintain positivity. Engage in prayer and daily communication with God. Refrain from being selective about the length of the wait and more on the being who is in control of the wait and most importantly, attuning oneself to the timing of the Creator. Returning to our narrative of the wait in the airport, one doesn’t shop the terminal while waiting to hear one’s name. They remain in place, listening, watching, being present on the potential at hand. During this time, during the wait, we cannot afford to be distracted with any other person, place or thing except that which God is speaking and presenting.

Back in the day, when my cousin had that plethora of buddy passes, my mother and her sister stayed the beneficiaries. They remained flexible. They remained prepared. They never were picky. They simply desired to get on the plane that would carry them to their destination. They were nice in the terminal – even against those who potentially could “knock them off the list of consideration” and considered their “competition.” They knew they would reach their desired state, even though sometimes it resulted in them returning home and trying again the next day. Sometimes they were even “upgraded” in that the only available seats were in first class. Amidst what you may be experiencing, and I’m speaking to myself too, Jeremiah 29:11 reads, “I know what I’m doing. I have it all planned out – plans to take care of you, not abandon you, plans to give you the future you hope for.” Thank you God for being all knowing, and knowing when being on standby has been fulfilled.