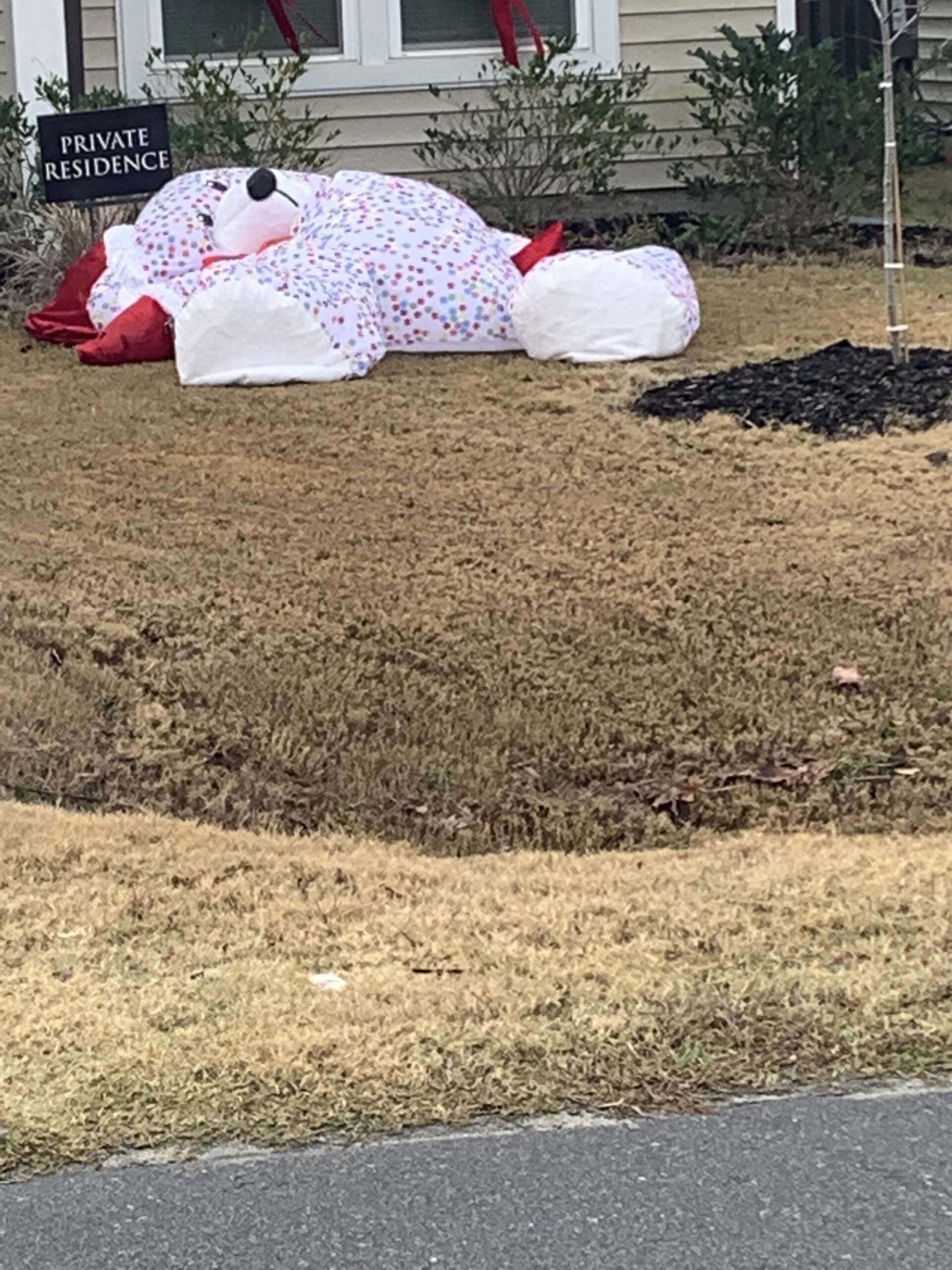 It Won’t Inflate For Long

I may have shared that I’ve been walking daily over the last three months. I have a curiosity about looking at how people elect to decorate their homes, inside and outside. The choices, selections, colors, make me happy. Their artistic expressions and how they came up with something so polar opposite from me is fascinating. However, I just don’t do inflatables. Let’s just say it’s a choice I would never…While walking through the neighborhood, almost a month after Christmas, I saw the largest inflated teddy bear that I have to believe was ever made. It stood towering near the top of the adjacent garage. Although a bit breezy outside, and clearly “out of season,” there it stood, defiantly demonstrating its ability to remain with audacity. It got me to thinking. First, like seriously, why would anyone choose inflatables (but that is obvious for me); second, how bold to still be on display when everyone else has made a decision to pack their inflatables up and “go home.” Finally, why couldn’t it just be obedient and deflate in the morning? Why all up in the daytime was this bear still “alive?” Of course each of the aforementioned rationales veered my mind to difficulty. The first month of 2022 is coming to an end, and yet perhaps there may be trials and troubles that seem reminiscent of times past. Do those desires, seemingly lost dreams and aspirations feel afar off and perhaps not purposed for 2022 as you imagined?

God understands. God sees. God knows when it’s time to pull the plug even when we feel like He doesn’t. I won’t lie to you and say that it’s easy, because quite frankly, it’s not. There is however a regimen that will enable us to persevere. Each of us can name an inflatable in our lives that towers over us, causing anxiety, uncertainty, confusion and loss of hope. But the Word of God provides a framework that is useful to apply. John 16:33 reads, “I have said these things to you, that in me you may have peace. In the world you will have tribulation. But take heart; I have overcome the world.” Notice that Jesus tells us that we will have peace before He mentions tribulation!!!!! In other words, it is okay to notice the large and looming inflatables in our lives, but we were purposed with peace before they were erected. They are temporary, not permanent fixtures. They cannot stand against the likes of God. As we carry Christ inside of us, we are equipped to confront everything that attempts to disrupt that which God has ordained.

By the time I walked to the end of the block and returned, the inflatable was deflated. It had withered to the grass. It no longer posed threat. It was absent of the power that it seemingly possessed. I am not suggested that our troubles dissipate so quickly, but you can rest assured that they won’t last long. In the interim, we have peace.