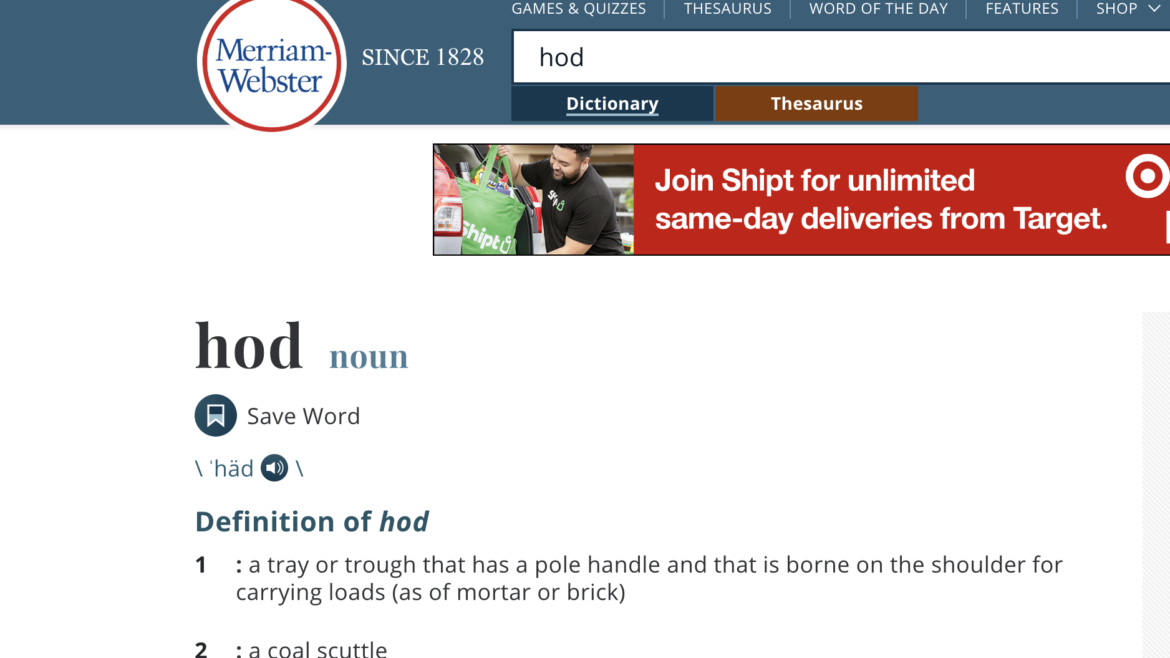 God Is My Hod

The most curious thing continues to happen. Each time I attempt to type God on my phone or tablet, the autocorrect kicks in and replaces God with Hod. At first it was only a minor inconvenience, but after a while, it become seriously annoying – such to the extent, I paused, reflected and realized that perhaps the Holy Spirit, who leads us into all truth (John 16:13) was attempting to get my attention. So I googled Hod. I wanted to know if it were even a word or a Word. Turns out it was both.

The definition of Hod is, “A portable trough for carrying bricks or coal.” It is used by builders. My God! The revelation began to hit me like a “ton of bricks,” (pardon the pun). So God really is my Hod! For it is He that assumes and carries all my hardness and the heaviness of anything I experience or even collect on my journey. He has the ability to hold the weight, to carry the weight for me, as I move to my next. Great Hod from Zion! As we travail, we are reminded that we don’t have to do it alone, and perhaps more importantly, we can leave the heavy lifting to the One who is built to handle it. The notion is, “Heavy is the head that wears the crown,” but we were never designed for this practice at the onset. We are to cast down our crowns. Revelation 4:9-11 (NASB) “And when the living creatures give glory and honor and thanks to Him who sits on the throne, to Him who lives forever and ever, the twenty-four elders will fall down before Him who sits on the throne, and will worship Him who lives forever and ever, and will cast their crowns before the throne, saying, “Worthy are You, our Lord and our God, to receive glory and honor and power; for You created all things, and because of Your will they existed, and were created.”

Casting down our crowns acknowledges the fact that we serve a God who has full authority, sovereignty and reign without need for our assistance or intervention. As we allow that simple fact to seep into our heads, our hearts and our habitation, we create space to cast any and everything at the feet of the Father. This past week has been extraordinarily busy for me. Clothes that were laundered last Monday are still awaiting to be placed in their proper place (and it’s Saturday morning for me as I write). To the right side of the bed, I see two pairs of shoes that were worn throughout the course of the week. This is not me. Or rather, this is not my norm. However, the last two weeks have been consumed with work while my boss is away and being in prayer for my friend. Clothes and shoes not properly stored is minor. However, how many emotional and mental and physical bricks invisible to the naked eye, but prominently displayed without seeking the intervention of God? Beloved, that is where the Hod of God presents itself. God is strong enough to contain all that we carry or toss or attempt to cover. His trough is big enough, wide enough, deep enough to handle our bricks of disappointment, sadness, anger, fear, and shame. Hods are typically carried across the shoulder. As strong as the material to create the trough is, as well as the person carrying it, it fails to compare to what God has the capability, propensity and willingness to carry on our behalf. Won’t you allow Him to be your Hod today? Now allow me to carry on to the things that Hod won’t do, like decluttering this room.